This week’s post brings us back to Tudor tragedy and the seminal Gorboduc. One of the earliest English revenge tragedies, it shows its influence from Senecan tragedies. It also has a reputation for being as tediously boring as an ASVAB test.

Gorboduc’s plot is listed pretty thoroughly at the onset on the original printing:

Gorboduc, king of Britain, divided his Realm in his lifetime to his Sons, Ferrex and Porrex. The Sons fell to division and dissention. The younger killed the elder. The Mother that more dearly loved the elder, for revenge killed the younger. The people moved with the Cruelty of the fact, rose in Rebellion and slew both father and mother. The Nobility assembled and most terribly destroyed the Rebels. And afterwards for want of Issue of the Prince whereby the Succession of the Crown became uncertain. They fell to Civil war in which both they and many of their Issues were slain, and the Land for a long time almost desolate and miserably wasted.

I can imagine modern theatre companies rejecting this because it either isn’t an entire page or a one sentence tagline. And it doesn’t speak to the company’s mission at all. Unless your compny is England and the mission is to land a man on Queen Liz (more on this later).

How Gorboduc can make you a better parent:

Why Gorboduc is important:

Wight = person. She really doesn’t like her son. Probably because he killed her other son.

25    Even Nature’s force doth move us to revenge

By blood again: But Justice forceth us

To measure Death for Death, thy due desert,

O silly women I, why to this hour,

Have kind and fortune thus deferred my breath

180  That I should live to see this doleful day

Will every wight believe that such hard heart

Could rest within the cruel mother’s breast,

With her own hand to slay her only son

But out (alas) these eyes beheld the same,

185  They saw the dreary sight, and are become

Most ruthful records of the bloody fact.

Porrex, (alas) is by his mother slain,

And with her hand a woeful thing to tell,

While slumbering on his careful bed he rests

190  His heart stabbed in with knife is bereft of life.

O Eubulus, oh draw this sword of ours,

And pierce this heart with speed. O hateful light,

Perhaps one reason the 2nd part is more appealing is that another writer scribbled it. The division between writers is right on the cover:

Thomas Norton was a lawyer, politician, writer and playwright.

His life’s highlights include: marrying Thomas Cranmer [who, by the way, was a character in A Man for All Seasons]’s daughter Margery. He then married Margery’s cousin Alice.

He also carried the title Rack-master and tortured Catholics. Because he sucked. This also opens up a debate about art vs. the artist. Norton’s play started Tudor/Elizabethan drama as we know it – but he tortured his fellow human beings for being the wrong religion….

So if you torture people on a rack and people call you “Rack-master” and you throw a hissy, you got some serious white privilege.

Thomas Sackville was a statesman and writer. In his role as statesman, in 1586 he was chosen to tell Mary, Queen of Scots she was gonna get executed. He also got locked up in his own home for being a crappy diplomat. I don’t think he tortured any Catholics.

Hot damn, we have a review of the initial performance!!!!! How wild is that???? 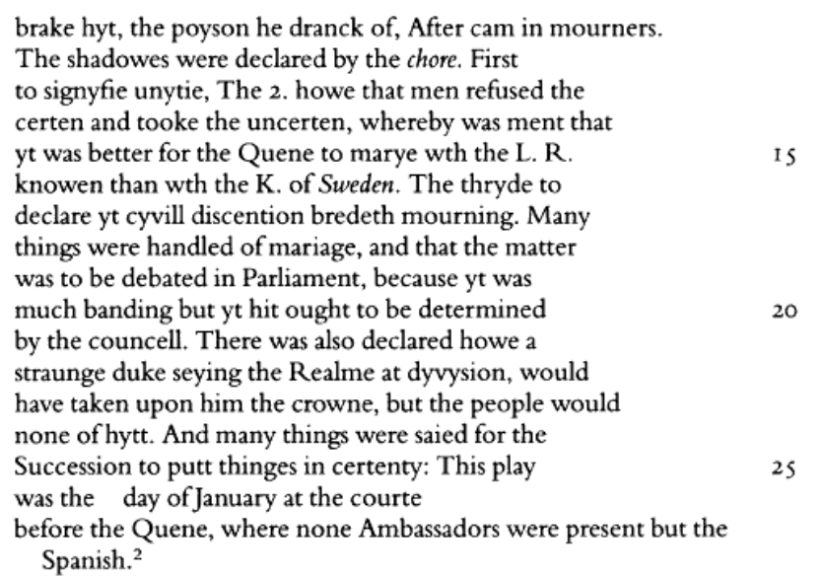 This is from an academic article here.

A couple of takeaways from this:

Gorboduc has been revived recently up in  Canada (home of previously profiled playwright Makrenna Sterdan).

“Shakespeare BASH’d is an actor initiative that seeks to take ownership of their own creativity by producing Shakespeare’s plays in social settings, creating a relaxed, exciting environment for the audience.

Their mission is to present Shakespeare’s plays as they were written: with simple staging, clear and specific language, and an emphasis on the words and characters telling the story.

Shakespeare BASH’d seeks to synthesize the traditional with the modern, to look at the plays from a place of curiosity, fun, excitement, truth, professionalism, and love.”

The reading’s director Daniel Briere as well as actor David Mackett (Gorboduc) were kind enough to answer some questions for us!!!

1. How did your opinion of the play change from before to after the reading?

Briere: I was struck by how powerful and emotional the play can be.  Videna’s speech after she discovers Porrex has murdered his brother is full of such gloriously earthy, rich language, as she vows to kill her son.  At the same time, I also came to love how the characters’ thoughts are ordered, how linear and logical their arguments.

Mackett: I initially viewed the play as a bit of a curiosity and I thought it would be a hard slog for the audience – it’s a very wordy play, with lots of rhetoric and long speeches. There’s not much action: if I recall correctly, all the deaths happen off stage.  As a result, the characters can come across as a bunch of “talking heads.”  It might have been a bit of a slog, but I found the audience was fully engaged and right with us to the end, which gave me a greater appreciation for the writing and the play.

2. What was your favorite line or scene?

Briere: “Know ye, that lust of kingdoms hath no law.”  Possibly the worst piece of advice ever given.

“Oh where is ruth? or where is pity now?

Whither is gentle heart and mercy fled?

Are they exiled out of our stony breasts,

Never to make return? Is all the world

Drowned in blood, and sunk in cruelty?”    How beautiful and haunting an image is that?

3. How did you explain Gorboduc to your friends and/or family?

Briere: I usually mentioned it was the first play written in blank verse in English.  That the story is similar to King Lear–a King divides the Kingdom for his sons, and then everybody dies.

Mackett: I told them it was the first English play written in blank verse, so it was interesting from a historical perspective, and also mentioned that Shakespeare used it as a basis for King Lear.  Plot wise, I told them it was a story about an ancient British King, who decides to take early retirement, and divides his kingdom between his two sons, who don’t get along.  Then bad things happen.

4. What is it about Gorboduc that can connect to a modern audience?

Briere: With our workshop reading, we were attempting to highlight the verse in hope that it would make the language more clear and accessible to a modern audience.  I think we were relatively successful.  But as in any of Shakespeare’s plays, or other playwrights to follow Norton and Sackville, the themes of this play are all still very human: ambition, jealousy, family, right, influence.

Mackett: Certainly the problems associated with succession are relevant to a modern audience.  I’m the thinking mostly about family-run businesses.  How often do we see a successful business, which was started by the parents, left to the children, who then make a mess of things – either because they weren’t qualified or as a result of infighting?

5. What was the audience’s reaction to your reading?

Briere: People joked that it was a bit dusty, but it is tough to get away from that when pretty much every speech in the play is three pages long.  We took advantage of the dumb shows written in between scenes to have some action and movement.  Maybe even a bit of comedy.  I think generally, though, people were excited to hear a play that no-one in the room had ever heard, let alone knew much about.

6. What parenting advice would you give Gorboduc and Videna?

Briere: Be careful who your kids make friends with; peer pressure is a real thing.

7. Besides Gorbodork and Gorbodouche, what would be some fun parody titles?

Briere: We were calling it Gord the Duck and the Adventures of ManDude (our favourite duke).

8. How can we rescue Gorboduc from obscurity?

Briere: Read it, talk about it, do it.  Things only go into obscurity when they are forgotten.

Mackett: Stage a full production.  Casting it with high-profile actors would help.

The full text of Gorboduc can be found here.

Thanks so much for reading. Expect a hot new monologue on Monday and an even hotter (possibly) playwright next Thursday.

A very special thank you to Shakespeare BASH’d.