Welcome back to Unknown Playwrights. This week’s all-Brecht link dump is brought to you by posters for Bertolt Brecht’s play Mother Courage and her Children.

A little bit about Brecht

Brecht: Contradictions as a Method

The theatre according to Brecht

The Quest for Bertolt Brecht (I hope it’s epic!)

Some of his unfinished works.

There is an International Brecht Society.It has a blog.

Yeah, I wish high schools would produce Mother Courage, too.

The Caucasian Chalk Circle in LA

Seems they don’t have it now, but maybe if you ask nicely… 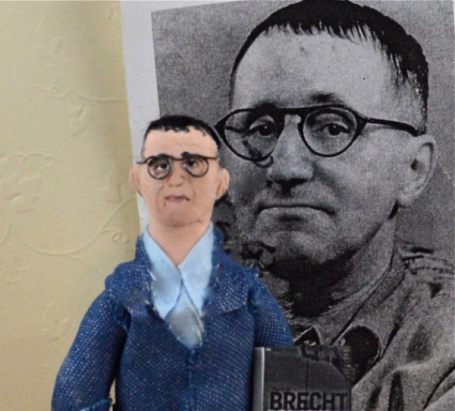 That time Frida Kahlo wrote down the German lyrics to Brecht’s Mack the Knife. It seems the image of Kahlo’s diary is gone, so here it is:

Possibly the most arrogant director ever stages a terrible preview for Mother Courage.

BTW, the Guardian’s drama blog was smoking Prozac back in May 2008:

Don’t bash Brecht – Why Brecht is best and Time for curtain to fall on Brecht all appeared with 8 days of each other. Weird.

That time a high school theatre in Namibia performed Brecht.

German actress-singer with Mackie Messer from 1963:

That’s it for now.