Beulah Marie Dix had a great, grand, glorious career as a writer, whether it was children’s books, novels, plays or screenplays. She excelled in all four and is considered a female pioneer in Hollyweird. We’ll talk more about her career soon.

Let’s take a look at two of her plays.

Dix’ first play we’re looking at is a one-act entitled Allison’s Lad and is set during the bloodletting known as The English Civil War.

The background really isn’t super-important here, since the story (or a version of it) could take place in any war. But you’ll get some background anyways.

Without going into the causes much, the English Civil War happened when Charles I outlawed Parliament. Parliament didn’t take too well to that. Royalists (nicknamed Cavaliers) and Parliamentarians (called Roundheads, seriously) duked it out all across the so-called British Isles.

One interesting thing is that some people got sick of it all and set up anarchist communes.

Eventually Charles I lost (and lost his head). Great Britain became a “Protectorate” under Oliver Cromwell.

Of theatre history note, the Cromwell regime banned theatre because they were horrible people.

Eventually people got tired of Oliver and his son Richard (who got the nickname Queen Dick) and brought back Charles II (the Restoration) and that is when Restoration comedy was born. And women were finally allowed to act on the English stage.

Here’s a neat “every day” map of the war:

But back to our play. Dix had a thing for history and wars. In fact, the one-act appears in a volume of one-acts set entirely during wartime. Other wars included in the volume are the 30 Years’ War and the 100 Years’ War.

The play is rather deceptive because it starts…trudgingly and goes out with a literal bang.

Several Royalist prisoners are playing cards. Apparently almost all have broken parole. Back in the olden days, if you were taken prisoner in war, sometimes you would be exchanged if you gave your word that you wouldn’t fight again for a certain amount of time.

Nearly all of these guys had broken their parole. Much is  made of one character (Winwood)’s parentage. He’s the titular lad. Sir William Strickland knew Winwood’s parents. Much is alluded to that his father was a coward…but that he is truly Allison’s lad and takes after her. 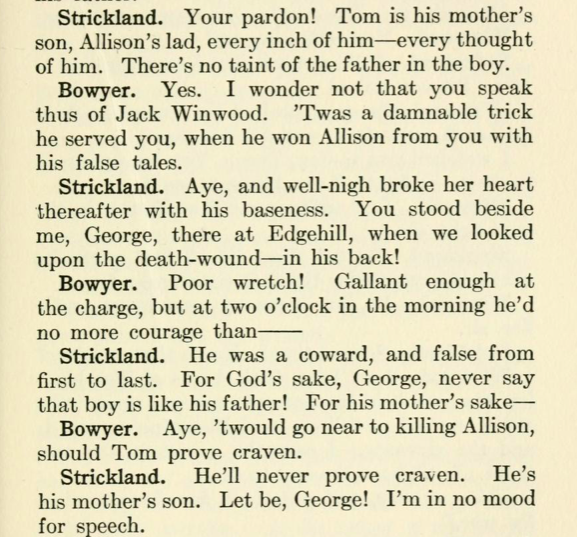 Oh, and in addition to Tom Winwood’s father being a coward, he is also a card-carrying loser.

Take note of how concerned Strickland is about all this.

The Roundhead commander informs the parolees they might pay for breaking their word.

Yeah, Winwood kinda freaks out. The commander then says one will be executed and they must draw lots, in the form of dice.

The play kindly provides an illustration. 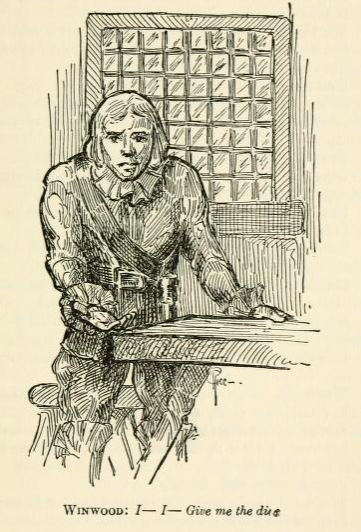 So son-of-a-coward must be executed, because that’s how the English Civil War works on stage. 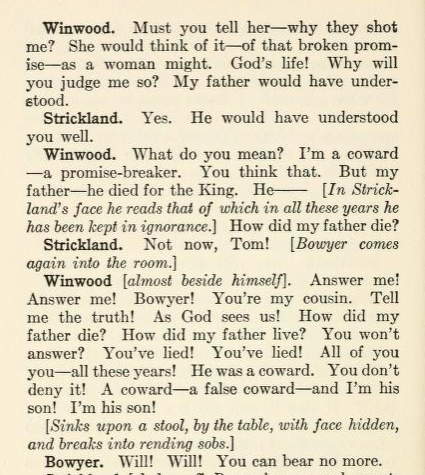 Winwood is led outside and duly shot. Strickland freaks out because…because…OMG…HE was Strickland’s real father…

And the shock of his son’s execution kills him.

This play isn’t bad, but a bit…dramatic. It was published in 1910. I picked this because despite Nix’ history/war fixation, when World War I showed up Nix took to writing antiwar plays. I chose one entitled Across the Border.

This play is another shiny, magnificent beast. It was performed in November 1914 (the war started in August) and published in 1916 before the US entered World War I but after bunches of people had died.

This play is set in an anonymous country. My money is on Ruritania. Or Sylvania.

There is some fictional war happening. Several soldiers are outnumbered. One, a junior lieutenant, is sent to break through/get help/be a big damn hero.

He comes to a house with an ominously titled Master of the House. The occupants of the house (who include a woman he’s only seen in his dreams) disarm him. They talk a lot of peace talk to him and make him feel guilty for, ya know, killing people.

He argues back that he did what he had to and he’s righteous, just, God approves, etc.

It takes him a while to figure out what the reader already knows: he’s dead.

He’s not very happy about this. He is forced to visit a cold and barren land and he learns that he is revisiting the aftermath of when his troops burnt down a town and killed civilians. In this regard it’s a bit like a Twilight Zone episode.

He begs for a chance to return to Earth to tell everyone not to have wars. The Master and Girl assent.

His anti-war visit goes over as well as you’d think. Nobody listens and he dies again.

The Brushwood Boy was a Kipling character who also joined the military and who also dreamt of a girl.

This play is quite good and unlike the lieutenant, is worthy of revival. Especially given America’s current addiction to perennial bloodlettings.

This play is the rare example of theme overwhelming plot, characterization and dialogue. And the play still works. The theme being “war sucks.”

The first scene from whence the second lietenant escapes. The crime against humanity? Turning their backs on the audience.

The Master interrogates the lieutenant:

The lieutenant carries around some pills to avoid capture.

Does this sound familiar?

The lieutenant is very descriptive: 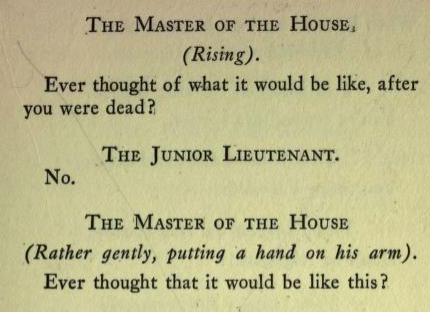 Welcome to the Twilight Zone.

Hehe. Not there yet.

He finds the girl of his dreams…after he’s dead. And she doesn’t want nothing to do with his murdering ass. 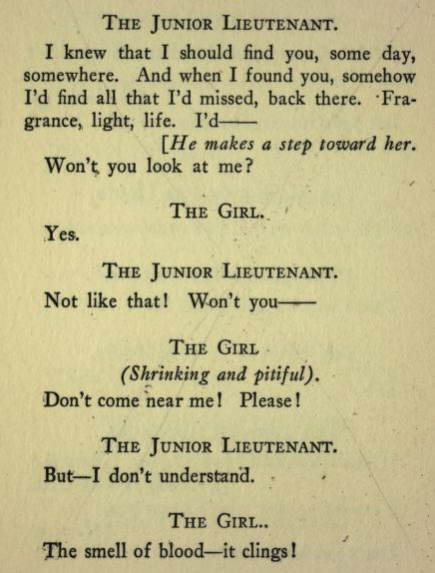 The lieutenant doesn’t want to die. 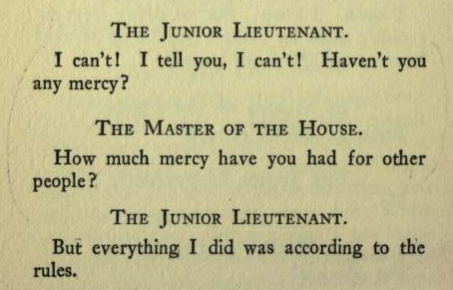 The lieutenant must look at the place his soldiers burnt down. The dead dog gets a higher place than him.

That’s a pretty thorough indictment of war. At the time, the K word was considered pretty standard in English. It even described wars. It is now most definitely a racial slur.

I don’t condone the word at all. The reference can be changed in a modern production easily.

For a history of the word and why it’s so horrid, please read here.

After he comes back, in a field hospital, he tries to share the warnings.

Having given humanity a chance and humanity rolling that chance up, lighting it on fire and flushing it into the Thames, the Girl comes to take him away… 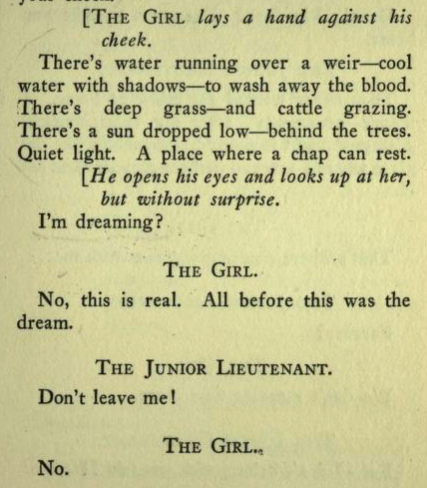 If someone revived the play, would anyone listen? 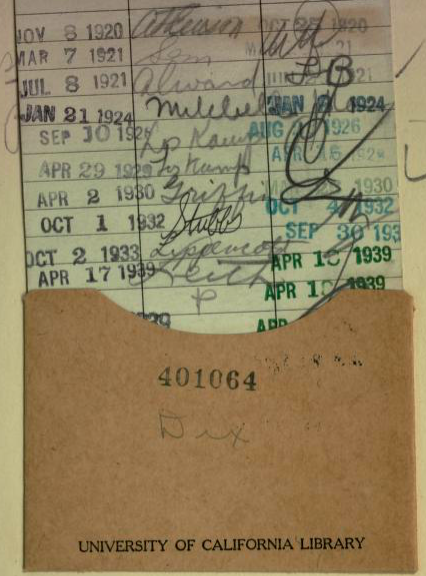 That’ll be a million dollar fine….

Beulah Marie Dix grew up in Kingston and Chelsea, Massachusetts. She studied History and English at Radcliffe College .

She became a successsful author of children’s books, novels and stage plays. She and Evelyn Greenleaf Sutherland collaborated on plays using a male nom de plume.

She married George Flebbe and had a daughter, Evelyn Scott, who worked for many years as a story editor at MGM.

Dix even wrote vehicles for Sessue Hayakawa. She continued publishing novels and passed away in 1970.

Her various works on archive.org

This photo group contains two pictures from the play.