Howdy all! Happy Halloween! Welcome back to Unknown Playwrights. This Halloween (just like last Halloween) we’re bringing you a Halloween play from the era of when tricks were given more than treats. 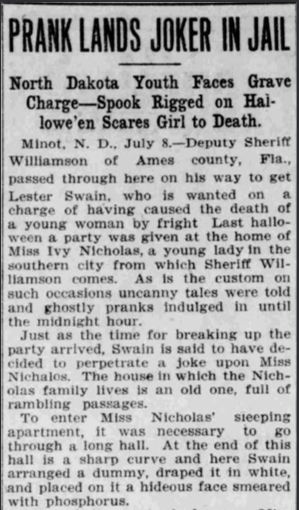 They also had cooler postcards, too.

Let’s see what we’re up against today.

Fair enough. I’ve done a lot of looking online and I can’t find a whole lot about the author. She was born in 1869 and died in 1947. She seems to have spent her whole life in Ohio. She had six brothers and sisters. The most interesting thing to me is that amongst 5 girls in the family only one seems to have married. And among all the sibllings, it seems only one or two married. I wish I knew what that was about. Even the Brontë sisters got married. More on Koogle later. Let’s meet our cast.

Tarrytown…yes, that Tarrytown. Let’s check out the scenes:

Poor Nell has been stuck in her room for a week. She’s been grounded – apparently seminaries  could ground their female students back in 1906. She was grounded for a “prank” and she’s got three days left on her sentence. Her friends Verda, Bess, Gloria, Gail, Freida & Gwendolin show up. Nell has been “ill” with a headache. She tells them not to worry…

Don’t worry or them wrinkles will get you! Also, it’s wrong to be hypocritical and hypercritical.

The girls decide they should do something spooky for Halloween, but Bess sees a problem.

She has a point. I love that the boys they’re after are seminary boys.

Bess reminds us of who lives in Sleepy Hollow. 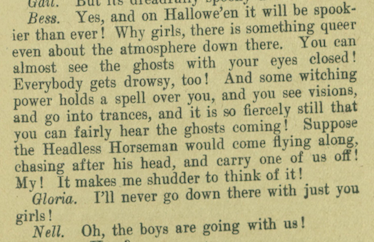 Take note: Fictional male characters in 1906 Halloween plays want a woman as handsome as she is venturesome.

Miss Noesome’s seminary gals are the finest! And Glo Gould is a whole sugarplum!

In what appears to be the prelude to a hazing ritual, the “ghosts” show up to obey their ghost master.

More hazing. Nell is then asked her name.

I like how the description of the ghost sounds devolve to “Moans, etc. (Emphatic)”

Time to tie up the girls (and Tom)! The boys/ghosts take them to the cave.

And hot damn! Napoleon shows up and so does Rip Van Winkle.

And amongst the ghosts of fictional and real-life people, a goddamned German doctor shows up. Because. Because? Oh, he wants their blood!

And Major André shows up.

“Young folks laugh” = play was written by an old person. And that other inhabitant of Sleepy Hollow pops up.

Among the ghosts, the Headless Horseman is a loser. Hehe.

And I know “squaw” is an offensive term that isn’t even found in any Native American language. But it’s found in this sad little play.

Eventually, the girls get scared and go back to their seminary.

I was right about the hazing, which has killed a ton of people over the years.

“IT WAS WORTH WHILE TO CLASH WITS WITH GIRLS OF THEIR CALIBER!”

This has several tropes in common with last year’s Halloween play.

Apparently, this was really performed at one time. The Koreshan Unity utopian community in Estero, Florida had a copy of this play in its papers.

I want to thank the folks at the state archives of Florida for scanning this play for me. So very, very kind of them.

Ms. Koogle was rather prolific in the early 1900s. Her output includes plays and sheet music.

Not sure the year on this, but Effie Louise Koogle just became very interesting:

If anyone has any information about Ms. Koogle, please let me know.

And here’s a song about The Headless Horseman, by the Monotones (famous for their Book of Love) 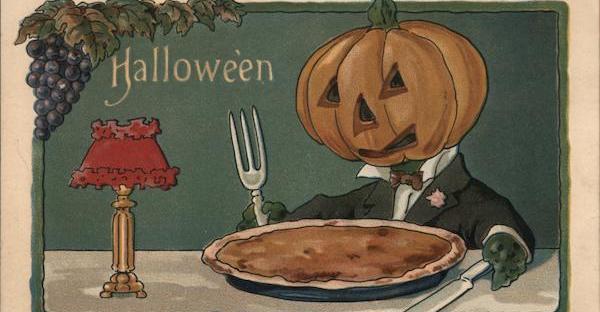 There exists a microscopic subgenre of Halloween-themed plays. Even more microscopic since we’re limiting ourselves to public domain work.

Halloween was celebrated a bit differently 100+ years ago. There seemed to be much more emphasis on the “trick” part as this headline attests:

Even Canadians could not restrain themselves:

The reason this applies to Halloween plays is that “romance” on Halloween was a bigger deal then and the plays mention it.

The first plays I took a look at were by Elizabeth F. Guptill, who wrote a bunch of books for children, including many plays. She also wrote hymns and in 1915 published the The Big Book of Hallowe’en. Several plays are included. However the book should be called The Big Racist Book of Hallowe’en:

Yeah, F that book right into the sun.

Fortunately there were Hallowe’en plays from the same era that weren’t drenched in the vile acid of racism.

Our play is The Haunted Gate by Edyth M. Wormwood, a one-act.

Edyth M.’s maiden name was Guptill and she wrote plays for kids and came from the same state as the other Guptill. This makes me suspect she’s Elizabeth’s daughter/niece/kin. Perhaps racism skips a generation? Hopefully.

The plot (using the term loosely) has high schoolers Marion, Grace, Irene, Marie and Ruth huddled around making Halloween plans. They write all their ideas on pieces of paper and…

Enter the “Booger Man’s Hole” at your peril, kids.

I do enjoy this example of the horror trope of dumb teenagers going where other people are smart enough to not go. Irene explains why: 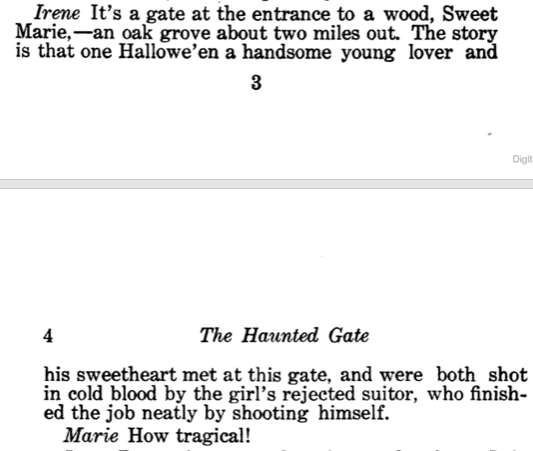 This play does not mess around! How many other high school plays start off with a double-murder and suicide? Tragical indeed!

Yeah, Marie – only speak when spoken to, impudent child! Nice of the ghosts to re-enact a murder suicide once a year. 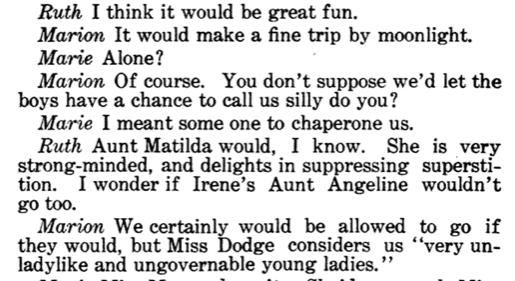 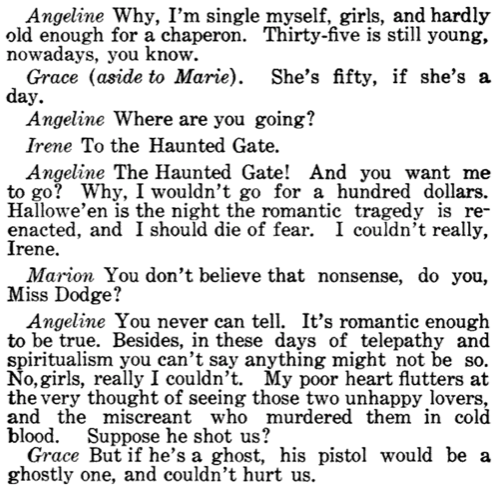 Angeline at the ripe old age of 35 (or 50) is the intelligent one here. But I do love Grace’s logic involving ghost pistols.

Ralph, Irene’s brother, had been kicked out earlier by the girls, but creeper extraordinaire, he’s been watching and delivers a maniacal monologue after they leave: 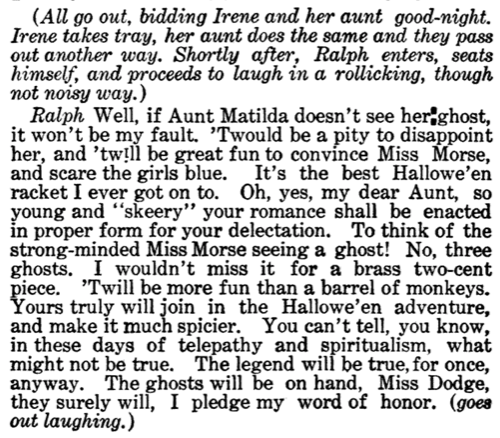 Yes, Ralph, you weird bastard, “’twill be more fun than a barrel of monkeys.” And he’s making Halloween “spicier.” Ugh.

Ralph and his brother decide that they’ll re-enact the murder to scare the ladies, because these were before the days of internet trolls.

But didn’t the murder include a woman? Well, duh – they figured that one out:

Poor Don Herrick is gonna get peer-pressured into cross-dressing just to scare some girls. Philip and Ralph could, ya know, find an actual girl. On second thought, probably not. I think we’re looking at the founders of the incel community.

While the proto-incels are planning to punish innocent women, the women are punishing themselves by trying to divine future husbands.

The women prepare to go to the Booger Man’s Hole:

THIS PLAY DOES NOT MESS AROUND!!!

You bring that gun, Aunt Matilda! She’ll be killing a few incels anyways.

Meanwhile, the boys are at the Booger Man’s Hole and are learning the nuances of spooning.

“I saw them spooning at the Booger Man’s Hole” should be a better example.

I know you’re amazed the play has four scenes, too.

Please, you haven’t even tried.

“When did you get in your practice, and who was your partner?” #guytalk 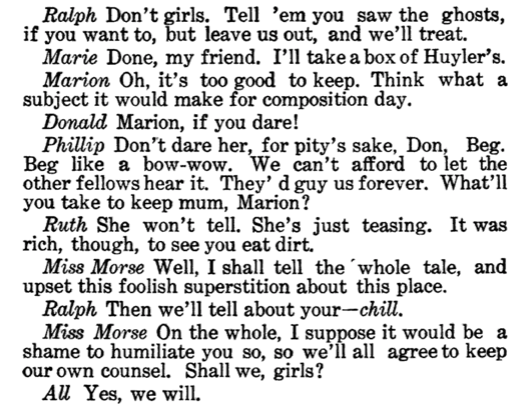 The play ends in a mixed message. Marie (the smartest character) gets a blackmail gift of Huyler’s chocolate and then everyone decides to cover for the boys’ stupidity. Boys acting dumb and not being held accountable? My how things have changed. Hehe.

You can read this jolly Halloween play in its entirety here.

Other works by Wormwood are here. She even has a couple books on Amazon.

Wishing everyone a happy and safe Halloween – even found a good song for you!

It is a creepy/campy cover of The Zombies’ Time of the Season. For those of you not familiar with the original, it’s right here:

And now the Batlord version. When I grow up, I wanna be like Batlord.

Join us on Monologue Monday where once again, we’ll have competing monologues!

For a list of all of our playwrights, please check here.