We’re back with yet another unknown playwright. This time it is Hilma Lewis Enander, who published a volume of short plays in 1913.

The first play in the volume is In the Light of the Stone.

In the Light of the Stone

This play is really goofy. The plot may be summarized as follows:

Mrs. & Dr. Brooks are hanging out in the Patterson home with all their rich idiot friends. Someone has stolen Mrs. Patterson’s necklace. Cops are there. Dr. Brooks receives a call about a child possibly dying from typhoid. He must leave at once – alas, he finds the necklace in his pocket and wants to give it to teh Pattersons, but his wife talks him out of it. She claims people will suspect him. Blah blah. Eventually she talks to the Pattersons. Gadzooks!!! Lo and behold she stole it, panicked and dumped it her hubby’s pocket. She feels soooooo sorry. The Pattersons forgive her and promise never to tell anyone.

This play, despite its mediocrity, doesn’t really have fun lines or examples of supreme weirdness to share here. Of course there will be a link at the end for the play.

If you want to introduce something that sounds kinda important (girl dying of typhoid) you should probably follow up on it.

The Man Who Did Not Understand

Aka this reader. Bwahaha. Sorry.

Ted is a miner somewhere out in the Great American Desert. 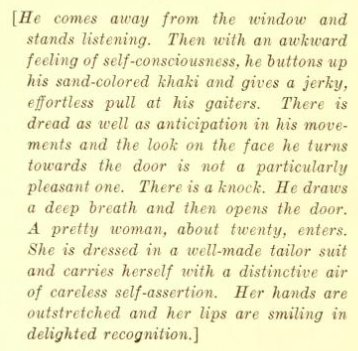 They’re really not into affection. Ted tries to convince Nan to go back from whence she came. It works out as well as you’d expect. 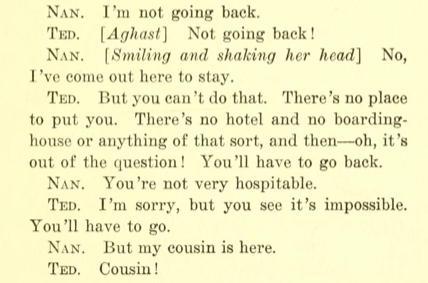 “But my cousin is here.” 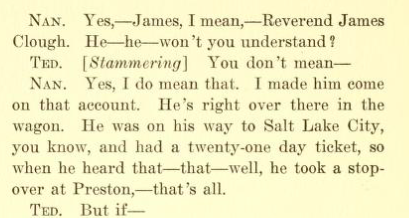 Salt Lake City? Now it all makes sense. Because if you were gonna show up at a guy’s cabin unannounced with your pastor/cousin with the intention of performing a marriage, then you should totally do it on the way to Salt Lake City.

“I’m ready for anything as long as I have you.”

Ted hems and haws about why he didn’t write her for such a long time. He says he can’t explain it in writing. She says: 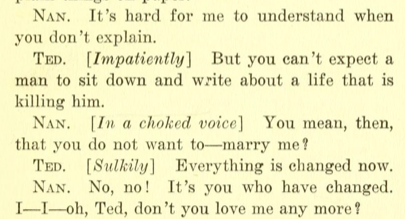 “It’s hard for me to understand when you don’t explain.”

She has a point, Ted. 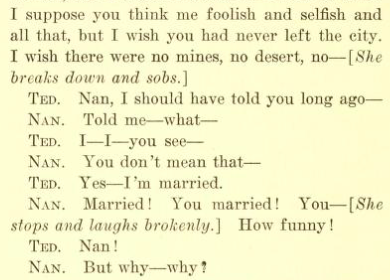 OMG. Ted is totally married!!!! Did not see that coming.

His wife is Minna, who wears hats.

“an air of almost indifference.”

Nan kinda freaks out when she sees Minna and simply runs away.

But, alack, Minna demands Ted explain all this Nan-sense. 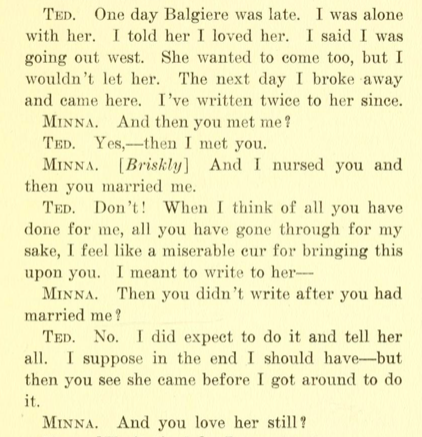 Ted is a fast operator. And fast with those mixed signals. “I love you, but you can’t come near Salt Lake City with me. Bye!”

He wrote Nan two letters. They were practically shacked up.

Minna was a nurse who helped Ted out – so he married her. Because Ted i this play sucks.

Well, three can play at that running away game…

That’s nice that the LA job opening is always there.

Before she leaves, Minna has some negligible advice. 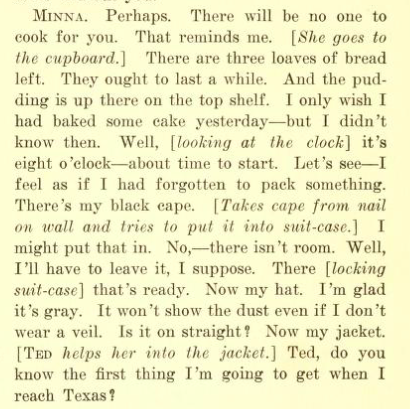 She suspiciously has prepared everything for her soon-to-be ex. Something’s afoot.

Minna, Ted’s never gonna give you up.

Don’t have a character just get all flustered and run away after having spent forever and a half to make an entrance.

Okay kids, why is it so hard to write a decent stage Western? Even I wrote one for senior actors.

In On the Trail, Bertha is minding her own business when suddenly Jack shows up. Man is on the run from the law…again out West someplace.

Bertha inexplicably covers for Jack when the cps come looking. Meanwhile, when the cops are gone she lectures Jack, who says she is preaching. 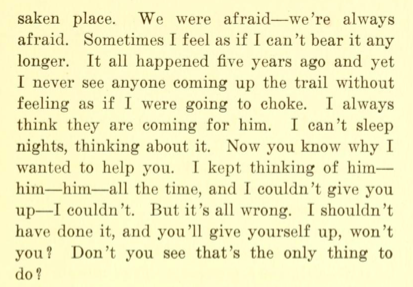 That’s some exposition right there about what’s going on with Bertha.

This play actually has a hint of being good when the machinations of a plot twist come into play.

Bertha has been telling the cops that Jack is her husband. Her for-real husband, Jim Bryce, comes home late and walks into a hornet’s nest of police, Bertha and Jack the outlaw pretending to be her husband.

Bertha’s now pinning the robbery on her actual husband by saying he’s the outlaw.

The sheriff reads the description of the bandit (for the second time in the play):

Bryce, you ain’t the only one bein’ “locoed.”

FYI: “Loco” is a Spanish adjective meaning “crazy.” It pops up in US English and sometimes English-language pop culture.

Also, this Ugandan/Danish band had a popular song about 20 years ago with the lyric “she just big up her chest and go loco.” Lieber and Stoller, eat your heart out.

Meanwhile, back on Planet 1913 Theatre, the sheriff questions Bertha. 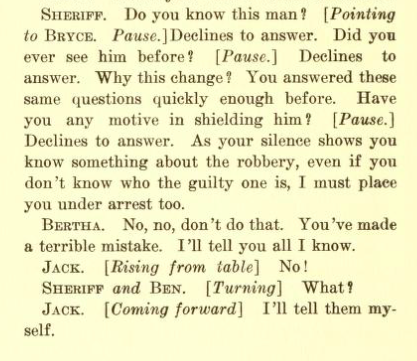 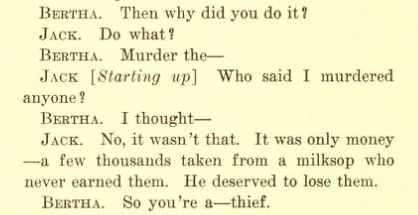 Ohhh, all a big misunderstanding. Whew!!! 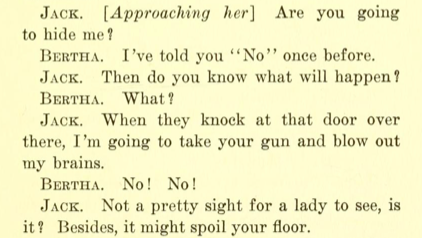 Jack knows how to talk to girls.  (FYI, if there’s one thing in this blog worse than the play, it’s that link)

So Jack explains to the cops how the robber would’ve gotten away…and he slips out the door and, and you’ll never believe it – gets away!!!! 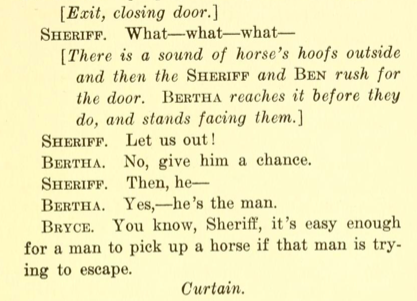 So this play had an almost-twist and was actually within shooting distance of “good.”

Most writing advice books will tell you not to make your characters sound the same. Let’s simplify that axiom: Only one character per play per act should be able to use the phrase “after all.” 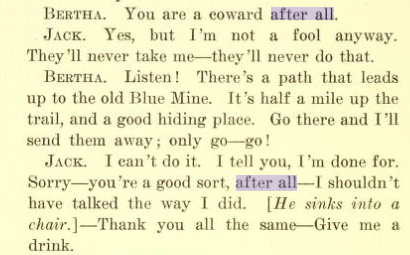 I could find nearly nothing in terms of biographical information about Hilma Lewis Enander. She wrote an article about Charlie Chaplin’s father-in-law in 1926.

I found a Hilma Lewis Enander from North Dakota, who would’ve been 18 when these plays were published (and that would make their undeveloped status more understandable) but apparently her maiden name was Nelson. I dunno. It would be nice to know more about this really unknown playwright.

The plays can be read here.

And to end this, here’s It’s A Small World for like an hour. Because it is a small world, after all.