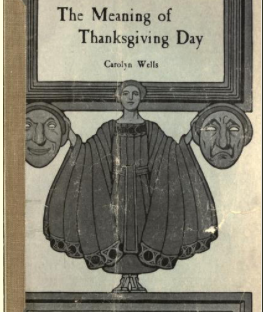 Just when you thought Halloween had a lock on goofy plays, Thanksgiving pops up with its own brand of bizarre. And we have TWO Thanksgiving plays. We have much to be thankful for.

For those readers who didn’t grow up in the US, Thanksgiving is a holiday that (according to pop culture) involves eating turkey, mashed potatoes, cranberries, pumpkin pie, rolls and a bunch of other stuff. Actual Thanksgiving meals can involve other foods such as collard greens, black eyed peas, sweet potato pie. potato salad with paprika and even lasagna. Heck, I’ve even had Korean food at a Thanksgiving meal. And some people even deep fry a turkey, resulting in sadly hilarious Youtube videos.

Thanksgiving isn’t just celebrated in the US and Canada, but also in the West African nation of Liberia.

It really isn’t all that different from other harvest-oriented festivals around the world.

Thanksgiving activities stereotypically involve interacting with long-hated family members, watching American football, eating as much as possible and passing out in front of the TV.

Some Americans pretend to care about homeless people around this time. And they make popular Youtube videos about it.

All this is in commemoration of some colonizers who didn’t die right away, so they had a feast.

Sometimes American schools have/had a Thanksgiving pageant. I don’t remember a pageant, but I had to make that stupid little Pilgrim hat with the buckle.

This is where the Thanksgiving plays come in. They would’ve been acted out by school kids across our great land.

The first play, from 1922, focuses on the harvest aspect of the holiday.

Ceres and all the other immortals are just hanging out, complaining about how mortals aren’t really thankful. What’s the best way to fix that?

I particularly like that PEACE doesn’t know what a family is….because there is no peace on Thanksgiving bwahahah. PEACE seems like a leftover from the end of WWI.

Everything is in verse in this play. And there’s a bunch of songs set to tunes people actually knew back then. More of those later.

So PEACE and PLENTY run off and catch humans.

Why can’t the son be a “degenerate, out of style blob”???

And Lord knows what the “best type of modern girlhood” entails.

The immortals interrogate the mortals about Thanksgiving. Here is a typical exchange between MOTHER EARTH and the MOTHER on Earth.

Each human gives their response and everyone sings a song about it. Here is dear old GRANDPA… 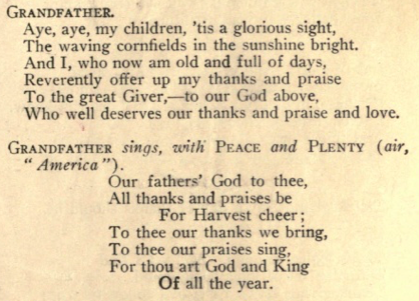 And the Thanksgiving Trio sing a song based on a song most Americans know as “My Country ‘Tis of Thee” but is actually named “America” and using the melody from “God Save the Queen” and about 1,000 other songs.

One can only imagine how much better the play would’ve been with Franklin’s stirring voice.

This is all fine and good until the nameless, yet “efficient, sensible and pretty” GIRL teaches everyone the true meaning of Thanksgiving.

So the brightest and kindest-hearted character is the GIRL. This is definitely a saving grace. And that is the play’s strongest aspect. We definitely need to learn how to give more than receive. I’d say a modern variation on that theme might make a suitable Thanksgiving play.

However, let’s go on a tangent about the air “My Maryland.”

This was the only video I could find without a Confederate flag. Why? This was a Confederate song that referred to Lincoln as a despot, called Northerners “scum” and had the phrase “Sic semper tyrannis” – the same phrase that actor from Maryland used right after he shot Lincoln. You can read all about it on the Wikihole.

So what did the brave lawmakers in Maryland do when they woke up in 2018 and realized they had the song of a bunch of traitors who got their asses beat 153 years before? Only the most limpdicked thing possible.

And “O Tannenbaum” is forever ruined by this.

The play basically ends with everyone saying “What an awesome girl!”

The play’s author, Carolyn Wells, was indeed quite popular for the time, writing more than 170 books, specializing in mysteries. She also married the heir to the Houghton-Mifflin publishing firm.

Please don’t judge her on the silliness of this Thanksgiving play. Instead, feel free to judge this accomplished woman based off of her vast, vast work.

Links to work by and about her will appear at the end.

Now for the second part of our play-a-thon.

The First Thanksgiving Day from 1907, written by Madalene Barnum, is hilarious. It appears in A Book of Plays for Little Actors.

The plot is pretty simple. It’s 1621 and the one-year anniversary of the Pilgrims totally not dying is coming up. The Pilgrims invite the local Native Americans over for a party. They use a Native American, Squanto, as interpreter.

The play neglects to mention that the real Squanto spoke English because he’d been kidnapped to England years before.

Americans to this day continue the tradition of just showing up someplace and not bothering with the language.

The Pilgrims properly prepare for their party –

As usual, women get the drudgery work.

The women don’t get to shoot stuff, but also they don’t have the humiliation of simply saying “Bang! Bang!” in the woods. 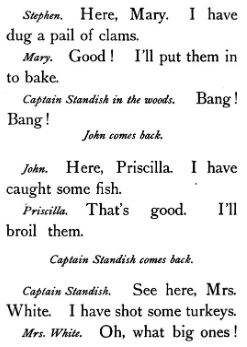 And the Native Americans show up, ostensibly speaking a real language. 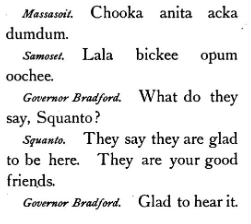 Well, Elder, there’s no football on the tube…

Should’ve thought of that before everyone said “Yes, yes!”. Sigh.

White men are good at war stuff. Got it. 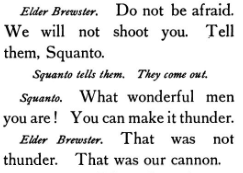 Don’t listen to them, Squanto! Poor Squanto cannot distinguish between a cannon and thunder.

Madalene Barnum didn’t quite have the career Wells did. She was born in 1874, but I haven’t found a death date for her. I doubt she’s 144 years old.

At the time she wrote this, she was an English teacher at the Brooklyn Training School for Teachers.

It’s obvious these writers were going for what was popular and acceptable by the dominant society at the time. And they appear to have succeeded.

What should be in a modern Thanksgiving play??

For a list of all our playwrights, please check here.

Before we leave you, I’d like to add a video which is kinda related to today’s topic, but it is an important one. And she’s funny.

And here is the link dump:

The Meaning of Thanksgiving Day.

Wells at Britannica. And Poetry Foundation.

Review and bio on a blog

Another book review on a blog. The comments are vicious.