If I had known
Two years ago how drear this life should be,
And crowd upon itself all strangely sad,
Mayhap another song would burst from out my lips,
Overflowing with the happiness of future hopes;
Mayhap another throb than that of joy.
Have stirred my soul into its inmost depths,
If I had known.

If I had known,
Two years ago the impotence of love,
The vainness of a kiss, how barren a caress,
Mayhap my soul to higher things have soarn,
Nor clung to earthly loves and tender dreams,
But ever up aloft into the blue empyrean,
And there to master all the world of mind,
If I had known.

“If I Had Known” by Alice Dunbar-Nelson, published at age 20.

This week’s subject is quite renowned. Many studies of her life have been done and are readily available online.

The purpose of this blog is to highlight unknown playwrights and we’ll look at Mrs. Dunbar-Nelson as a playwright but also in regards to her other work as it seems fit.

She was born Alice Ruth Moore in 1875 in New Orleans. Her mother was a seamstress and former slave and her father was a white sailor. She grew up in the Creole culture of New Orleans.

Moore was able to graduate college in an era when almost no Americans even attended college:

For the record, she graduated from the HBCU Straight University (now part of Dillard University).

She published her first book at age 20. At this time, she moved to New York City where she helped found and worked at the White Rose Mission. From Wikipedia:

“Founded to offer shelter and food to destitute migrants,The White Rose Mission also offered job placement for the new arrivals. As African American workers were relegated to jobs as unskilled laborers, conditions and opportunities for African American female workers in New York City were deplorable. The aim of the employment placement service of the White Rose Mission was to furnish skilled, circumspect domestic workers to middle-class homes. The Mission also offered instruction in aspects of housekeeping, such as: cooking, sewing, expert waiting and laundering. Additionally The Mission provided a clean parlor where women who were dues-paying members could entertain callers.

The mission’s library even included a 1773 edition of Phyllis Wheatley‘s poems. I like to think maybe Dunbar-Nelson made that happen.

By the late 1890s, her poems and stories were being regularly published in America, where they caught the interest of famed poet Paul Lawrence Dunbar. Supposedly he fell in love with her at first poem/photo. They corresponded for two years before finally meeting at which point he proposed to her.

This marriage has been called “tragic” “troubled” – I’ll call a loser a loser. Paul Lawrence Dunbar was a psychopathic rapist and wife beater.

According to the brilliant book about their marriage by Eleanor Alexander ,  Dunbar raped his future wife before the marriage and her physical recovery from that rape took several months. His treatment of her (not surprisingly) remained the same throughout the marriage when he was actually home. He’d leave her home alone for months at a time while he went on recitation tours. The marriage effectively ended when “he beat Alice within an inch of her life.”

In Alice’s own words:

“He came home one night in a beastly condition. I went to him to help him to bed—and he behaved . . . disgracefully. He left that night, and I was ill for weeks with peritonitis brought on by his kicks.”

She never returned to him and only communicated once when she replied “No” to one of many, many letters he sent her begging forgiveness, etc.

Now we must take a time out for a bit.

If you’re in an abusive relationship or even just have questions, please use this site in the US.

In Canada, you can reach out here. And in the UK, here. We love Unknown Playwrghts and despise domestic violence.

In fact, I propose we rename all those high schools named after Paul.  Let’s rename them after his wife…

Though Dunbar-Nelson is chiefly remembered for her exquisite poetry, short stories and journalism, she did write at least three plays.

The play is so short, you can read it in two pages. 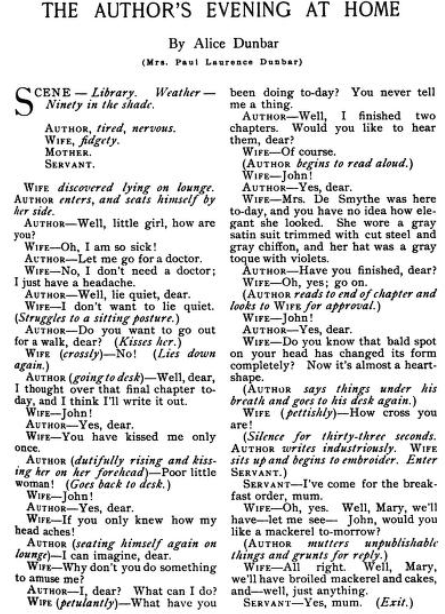 So the humor is l gentle. I could totally see a modern artistic director rejecting this play for having too many characters in such a short amount of time as well as “We don’t do period pieces.” Then, when being told it’s by the famous Alice Dunbar-Nelson, having a theatregasm and producing it with an era-appropiriate atlas and a prologue explaining the Boer War. Sigh.

It’s doubtful this was ever performed. It seems to be a closet comedy. The magazine, The Smart Set, was on its way to becoming a big deal. It would go on to publish Joyce, Conrad, Yeats, Pound, Strindberg and Fitzgerald.  That Dunbar-Nelson could publish a piece in a magazine targeted at New York City’s elite shows her immense ability.

Between this and her next play, she taught high school, wrote a bunch of short stories and poems which made her relatively famous and she left Dunbar, secretly married Henry Arthur Callis, a prominent doctor and one of the founders of the Alpha Phi Alpha fraternity , divorced him and married Robert J. Nelson. And had a few girlfriends.

Among the women Dunbar-Nelson would have relationships with in her life were Edwina B. Kruse, the principal of the high school where she taught, artist Helene London and journalist/activist Fay Jackson Robinson.

Despite her journalism being geared towards black readers, her fiction and poetry largely avoided discussion of race. As the great Gloria T. Hull puts it:

I’m pretty sure explicitly racial content in her fiction and poetry would’ve hampered her publication chances for a larger (i.e. white) audience.

This changed around the time of her last marriage where she began to explicitly write about race quite often.

One interesting work she composed was An Hawaiian Idyll, a full-length operetta. This script was never published, but two documents related to it are in her papers at the University of Delaware.

For those of you not familiar with her story, it’s tied up with Hawaii’s story, namely the monarchy was overthrown by a missionary kid and annexed by the Americans. Then the princess died, of rheumatism.

In the play, the plot is similar, but the setting has been re-imagined to serve Dunbar-Nelson’s purpose: as an allegory for “Africans’ loss of culture and identity in the Americas.”

In the play, “Kaiulani” is sent abraod to be educated, ends up in San Francisco where she learns her mom has been overthrown and rushes home to save the day where she restores Hawaiian sovereignty and the monarchy. None of that happened. Some interesting postmodern alternate history there.

As far as we know, the play was performed only once, at the high school where the author taught. The play would’ve been performed by an all-African American cast.

Here is an interesting analysis of what little is known of the operetta.

And thus we move on to 1918 and The Crisis, the magazine put out by the NAACP. Shortly before this this time editor W.E.B. Du Bois was taking the magazine in a radical (for then) direction, even publishing a photo of the lynching of Jesse Washington. WARNING: the Wiki article has some graphic photos. He also opposed African Americans supporting the war effort against Germany, though he may have had personal reasons for doing so….

“Du Bois was so taken with some aspects of German social behavior that he retained certain habits from his student days in Berlin for the rest of his life. Prussian social customs gave him, or at least reinforced in him, a certain distinguished bearing or carriage, an apparent aloofness not uncommon among shy people. This trait, augmented by a clipped manner of speech Du Bois acquired in Germany, was often misunderstood as reserve, distance, even haughtiness, and was to characterize Du Bois for the rest of his life. In his physical appearance Du Bois, described later in life as a mandarin, was just following the fashion set by the Kaiser in his style of trimming his hair and beard, as well as his habitual use of a cane and gloves.” 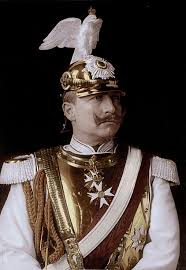 Exhibit A: Kaiser Wilhelm II with goofy moustache and eagle taking a dump on his head.

Exhibit B: W.E.B. Du Bois with goofy moustache, but no eagle plus a goatee.

So the US government used the Espionage Act to lean on the paper and Du Bois promised to self-censor, which resulted in the magazine actually supporting the war against Germany.

And that is where Dunbar-Nelson’s play  fits into the puzzle of WWI propoganda. She wrote a play with a purpose and that purpose was to encourage African Americans to totally support America fighting a European war.

The plot is pretty straightforward. A family who lost their father in a lynching and now live in the north have a debate when one of the boy’s is drafted. Various ethnic neighbors chime in and an outside social worker also gives her two cents. It’s interesting and definitely a relic of it’s era. This isn’t the first time this blog has profiled a WWI propoganda play.

Highlights of the play:

2.  An early written use of the word “not” to negate the previous statement.

This trend was popularized by the Bill & Ted movies and Wayne’s World sketches and movies in the 1990s. Further discussion here.

It is pure propoganda, as this exchange about  Germans commiting some insane atrocities:

This Chris is a bit of a badass. And familiar enough with ancient and Biblical history to invoke Moloch.

He even gets to deliver a badass monologue. Warning: archaic racial slur at the end. 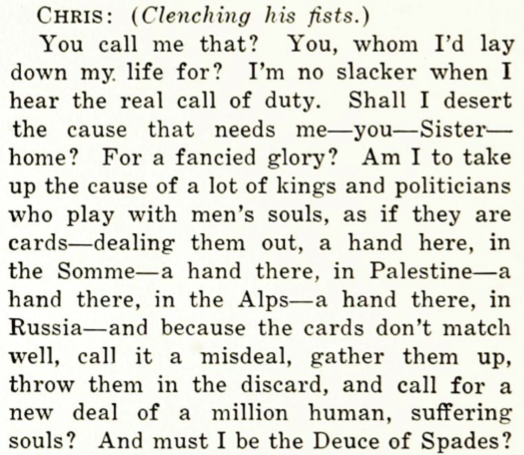 See what Dunbar-Nelson did there with the card game metaphor?

And for the ending, which is a relic of its day:

At least one scholar has suggested Cornelia is the author’s avatar in the story.

Here’s a video of a table read of the play from Chengchi University in Taiwan:

The only known full production happened at the high school Dunbar-Howard taught at, where, according to her niece “She produced her play and  we all took parts. The audience loved it…but nobody would publish it.” That niece, Pauline Young, was her aunt’s student at the time and would go on to do great things.

A formidable part of this play is that it may have been written with white readers/audiences in mind. There’s the criticism of how America treats her minorities but also reassurrances that black soldiers and civilians will do their part to stop the “Hun.” In this manner it may very well be worth reviving, as this is an argument that isn’t going away any time soon.

More could be  (and has been) written about Alice Dunbar-Nelson: her life as an LGBT pioneer and icon, as a Creole woman of the 19th Century, as a prominent poet and as a writer in general.

Before the link dump, here is a video of a young student reciting the Dunbar-Nelson poem/lament “I Sit and See” – a commentary on American women’s plight in her era.

For all our other playwrights, please check here.

Mine Eyes Have Seen (slow load, but worth it)