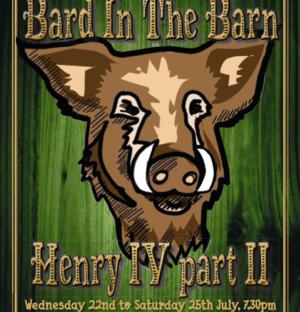 Howdy. Yeah, I know, Henry IV having two parts is already kinda dumb since he is the fourth to begin with. BUT on my quest for unisex monologues, Shakespeare has a couple.

For those of you aren’t too familiar with Henry IV, part 2, it follows Richard II and Henry IV, part 1 in Shakespeare’s history plays series. It precedes (naturally) Henry V.

Basically Henry IV, part 1 deals with finishing off a revolt against the king (Henry IV). The comic character of John Falstaff returns and so does Prince Hal, trying to win Dad’s approval.

One interesting thing to note is that, according to the Wiki gods:

Part 2 is generally seen as a less successful play than Part 1. Its structure, in which Falstaff and Hal barely meet, can be criticised as undramatic. Some critics believe that Shakespeare never intended to write a sequel, and that he was hampered by a lack of remaining historical material with the result that the comic scenes come across as mere “filler”. However, the scenes involving Falstaff and Justice Shallow are admired for their touching elegiac comedy, and the scene of Falstaff’s rejection can be extremely powerful onstage.

There is an argument that perhsps Hal wasn’t even the main character originally, but that interpretations since around 1800 have favored him over Ye Olde Falstaff.

But we’re here for that awesome unisex monologue of Rumor, who, according to Shmoop:

In the play’s “Induction” (prologue) a figure wearing a robe “painted full of tongues” steps onto the stage. This figure is not a human character – it’s a personification of rumor or, hearsay – the kinds of stories that are circulated without any confirmation or certainty. In other words, Shakespeare takes an abstract concept, rumor, and gives it human characteristics.

For a fine copy of this prologue/monologue, check out Sparknotes.

Now, let’s see this character in action, though not all actors are wearing a robe covered in tongues…

For more Shakespeare monologues, there’s  The Two Noble Kinsmen and Titus Andronicus along with Cymbeline.

Join us on Thursday when we discover an interesting American playwright from the 1910s…and next Monday, when we make the monologues happen again.